There are a large number of antenna designs for HF. One choice out of many is the fan dipole. The ability to transmit of multiple bands without needing a tuner (and even more with a tuner) is a very desirable factor in choosing a versitle antenna for HF.

Before this particular caged fan was ever even concieved of, there was the WA5VRQ “Billy Ray Bubba” fan dipole for 40 and 75 meters. The WB5SPA club has often turned to “Billy Ray Bubba” on field day. (left image)

Even at about 20 feet off the ground this antenna works reasonably well. Raising to the 35 foot level made a considerable difference with both transmit and receive. Inspiration struck when WD5DJX upgraded his two leg horse fence antenna to a 4 leg one. I noticed an immediate jump with his signal on 75 meters. This 4 leg antenna heard better, transmitted better, and was more broadbanded. All of this from adding an addition run of the horse fence material on each side seperated by about a foot. What we do know is that the wider the antenna elements are the larger the bandwidth. It is also not necessary for those elements to be completely solid for this to work. This is the magic of the horse fence antenna. The ribbons used for the antenna elements have several seperate stainless steel wires running through the length. All the additional metal makes for more capture on recieve.

One late night brainstorming session later an idea was born. Just click on the diagram for a full size complete diagram roughly to scale. My thought was adding this concept to the fan dipole that had served me so well. In these center fed antennas most of the radiation comes from the center area. The elements on the “Billy Ray Bubba” had very little separation for the entire middle part of the antenna. I figured it would make more sense for the spacing to be consistent throughout the entire run of the elements. All of the elements were carefully hooked to the feed point with exactly the same length of wire. I decided to solder those together connected to a 1:1 current balun, and fed with rg8x coax. 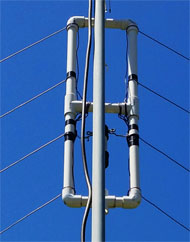 Image on the right is a close up of the center feed point of the antenna. Image to the left is the original image from the October post. Once the center point was done all that was left was to use 4 two foot long pvc pipes as spacers and to tension the antenna. Anchoring it to the end points at the top and the bottom kind of volley ball net style kept the spacing consistent and has proven durable though wind, hail, ice, and combonations thereof. My lengths are 59 feet on 75 meters and 31 feet on 40 meters. The actual real world deployment had the angle of the inverted V close to 60 degrees. The virtual width of the combined element shortens the length slightly. Other factors that will effect length are angle of the elements, material of the wire, and whether or not it is insulated. Since every QTH is different it is a good idea to cut the antenna long because its always easier to make it shorter. On the spacers I ran the wire though small holes drilled in the right spots with the wire wrapped in a slip knot kind of method that makes it very easy to shorten and lengthen the elements for tuning, The excess wire is wrapped around the pvc pipe and taped in place.

This same concept can be applied to any combonation of bands depending on how much space you have to work with. The 40/75 is just the example of the prototype.

It covers with less than 2:1 SWR without a tuner 3750khz to 4050khz, 7100khz to 7400khz, a good slice at the top of 15 meter that with tuning could cover the entire band, and also 27.5mhz to 29mhz. The entire technician phone portion of 10 meters has virtually no swr at all. After I take the SWR analyzer to this again I can post a more detailed report. With the tuners I’ve worked 75, 60, 40, 30, 20, 17, 15, 12, 10, 6, and even 160 but with a labor intensive tune with poor peformance. This has gotten excellent signal reports on 100 watts on every one of those bands except 160. I’ve even been accused of running power on 75. I’ve been told that I have one of the loudest 100 watts stations on the band. Whether or not this is true I cannot say, just going by what I’ve been told. I have listened on remotehams.com remotes to my signal and it does seem to be an order of magnitude better than it was.

More pictures and details to come… Check back! There are still links to add and construction details. This page is far from done. I hope its a good enough start.

So many things have broken over the last six months that there is very little left intact. Since spring there have been a long string of power surges, lightning strikes, wind damage, and magic smoke leaving nearly every device. By the time one thing was fixed and operation another event would break three more things. As if there were not enough issues, a fallen tree took out the antennas for the shack. The last of the base radios failed early this fall.

I’ve removed the blown up equipment and supporting wiring. I lack the time and energy to rebuild what was a decade in the making. I’m going quiet for a while. I may well be back at some point, but that is far enough down the road not to be in sight.

Due to aging hardware and software in the data center this site cannot be upgraded without a complete start from scratch, and an upgrade is required to get it to run on modern software. As bad as the whack-a-mole with the radio and power systems was, the digital side of things has been an even bigger handful.

I am going to archive this site into cold storage for another day where I might be able to pull a magic rabbit with a quick fix, but don’t look for it soon. If you want anything that is on the site I’d suggest downloading it very soon. Nothing will be erased, and it may even return sometime between later and when pigs take flight.

In the ways that matter things are fine, so don’t worry be happy… I’m also shutting down the last of the online projects as soon as a graceful exit presents. It is time for a long sabbatical to examine the insides of my eyelids and recharge.